Lars Hertervig became known primarily as a landscape painter and devoted himself to the nature of Southwest Norway in particular. Exploring the effects of light on its surroundings and depicting nature under diverse atmospheric conditions seem to be essential themes of Hertervig’s art. Due to periodical bouts of psychological torment he lived fairly isolated from professional art circles, a fact that has contributed to the creation of many myths surrounding both his person and his art.

Lars Hertervig was born on the island of Borgøya in Tysvær on the southwest coast of Norway but his family soon moved to Stavanger. Hertervig demonstrated artistic talent early on and, thanks to generous help from the city’s well-to-do citizens, he was given the opportunity to study both in the capital and abroad. During the years 1850-51 he studied at the Royal College of Art and Design. The following year, at the age of 22, Hertervig travelled to Düsseldorf and received private lessons from the famous Norwegian romanticist painter Hans Gude. Here he developed quickly as a landscape painter and Gude remarked that he expected greater things of Lars Hertervig than of any of his other students.

After a few years in Düsseldorf Hertervig became ill; he was morbidly suspicious of his colleagues and was tormented by hallucinations. In 1854 his health deteriorated even more; Hertervig became so ill that he had to return to Norway. Two years later he was voluntarily committed to Gaustad psychiatric asylum on the outskirts of Christiania (now Oslo) He was very unhappy there, however, and due to an insufficient treatment program he was sent home in the spring of 1858. Financial assistance from his home town’s privileged class ceased during this period and Hertervig was now forced to depend on welfare support. He eventually moved back to Borgøya where he lived with his uncle up until 1865. There is little information about Hertervig’s life from the end of the 1860s until his death. We do know, however, that he spent his last years in Stavanger and that his financial situation became increasingly more difficult. Despite this he refused to accept gifts, even though there were many who wished to help him; he was determined to manage on his own.

Despite the fact that Lars Hertervig’s unique visionary landscapes have been commonly interpreted in the light of biographical circumstances, it is difficult to pinpoint any real effect of illness on his art. Up until the mid-1850s he worked in a rather classical ‘Düsseldorf’, romantic landscape tradition with emphasis on subdued colour tones and strong contrasts. From the middle of the 1860s light gained and increasingly important place in his work and the previously dark colouration gave way to a purer and clearer palette. Although he developed a unique, characteristic style, Hertervig remained true to observed reality and portrayed nature as he saw it throughout his career. 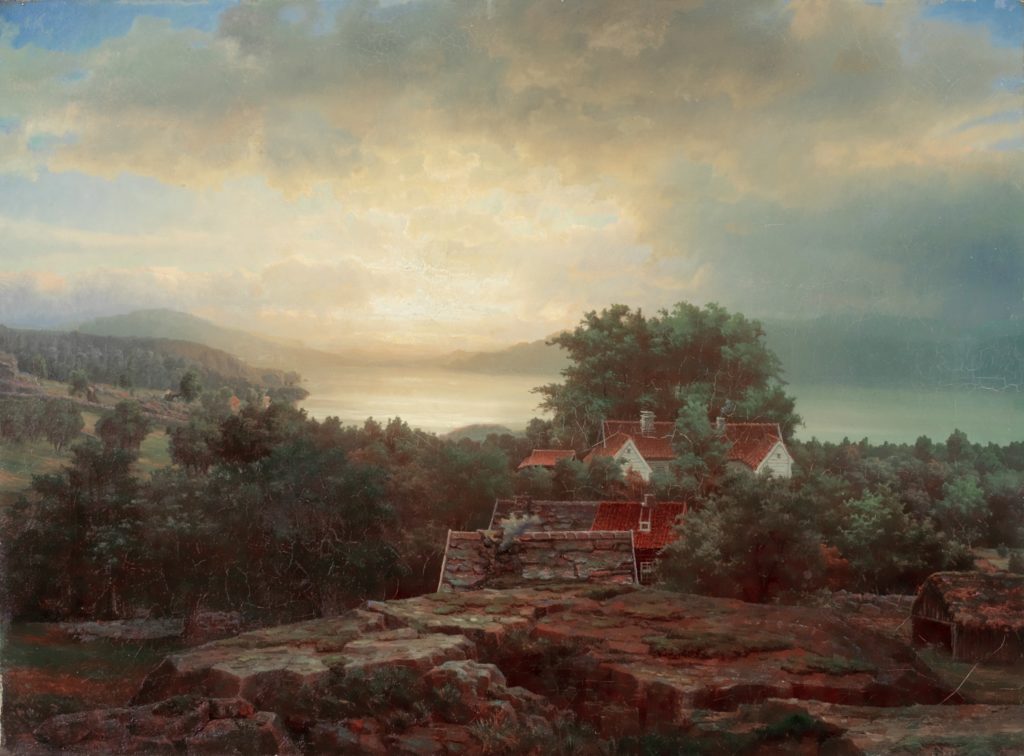