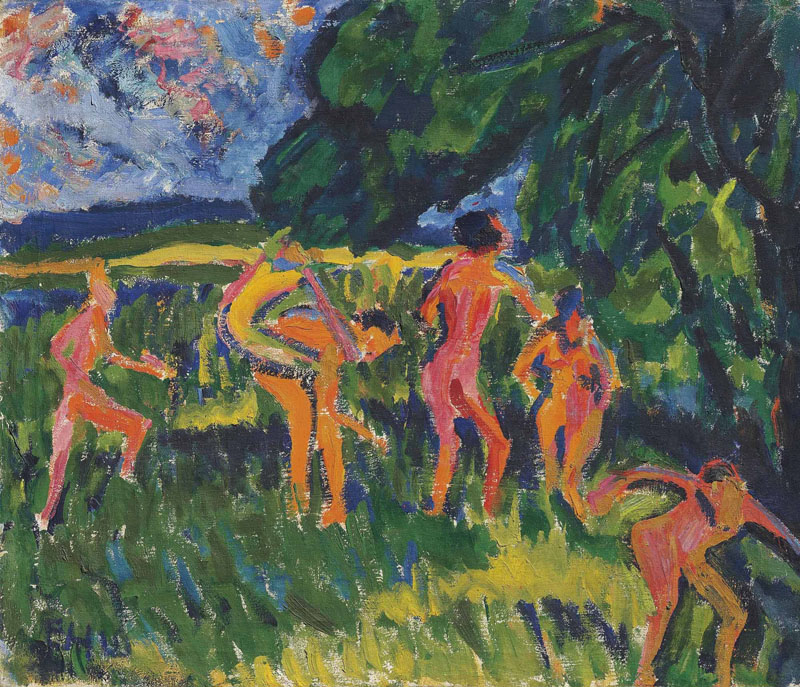 With its bright, fresh palette and spontaneous, intuitive brushwork the painting Bathers at the Forest Pond is characteristic not only of Heckel, but of the entire Die Brücke group’s form of Expressionism during this period.

Aside from depicting the urbanised life of the big city, representations of naked human figures in nature, or bathing scenes as they are often called, is a key motif of the German Expressionists. This picture was painted in the summer of 1910, when Heckel lived and worked near the lakes in Moritzburg – together with his artist friends Pechstein and Kirchner – on the outskirts of Dresden.

This work was formerly included in a significant German collection, the so-called Hagemann Collection. Carl Hagemann was a German businessman who began collecting art around 1900, and who soon concentrated on the German Expressionists (with whom he also became good friends). Hagemann had planned to donate his large collection to a German museum, but this was never realized due to the cultural politics of the Nazis. When he died in 1940 the collection was preserved and hidden in the Städel Museum in Frankfurt by the museum’s director at the time, Holzinger. The collection survived the war and was exhibited in its entirety in Städel in 1948. Since then many of the works in the collection have been loaned to various German museums. For the past ten years,Bathers at the Forest Pondhas been on view at Museum Folkwang in Essen, which has an excellent collection of German Expressionists. In February 2015 the DNB Savings Bank Foundation acquired the picture in an auction in London– and it can soon be examined at close range at the National Gallery in Oslo.

See all artworks by Heckel, Erich