Double bass made by Giovanni Battista Ceruti in Cremona, Italy, in 1800. Håkon Thelin plays on this instrument.

Giovanni Battista Ceruti was the leading maker of 19th century Cremona. The tradition of violin making in the city regarded as the birthplace of the violin had significantly diminished since the deaths of Stradivari, Guarneri and Bergonzi in the mid eighteenth century, but Ceruti made significant steps towards restoring the reputation of instrument making there. This double bass is one of the earliest examples of his honourable and dedicated work in that direction.

He was born in Sesto Cremonese, just north of Cremona itself, in 1756. At first working as a weaver, he moved to the city just before 1785. There, apparently encouraged by the little-known dilettante violin maker Count Luigi Maggi and the last makers of the Bergonzi family, he changed course, and by 1802, when the only other professional maker in Cremona, Lorenzo Storioni finally left, he was the only remaining practioner of a long and unique heritage. He died in 1817, leaving his own legacy of violins, cellos, and of course this fine bass. His output was energetic and prolific, if lacking in the finely worked detail and finish of his eighteenth century predecessors, although it compares extremely well to that of contemporaries such as Storioni and Carlo Bergonzi II. The economic climate, a falling away of aristocratic patronage and the establishment of  virtual mass production centres of stringed instrument making  in Germany would have made it very hard to sustain the old traditions of Stradivari and Amati.

This double bass is a magnificent work from any standpoint, however. It seems to be modelled on the work of Gio Paolo Maggini of Brescia, since in fact there are very few precedents for the double bass in Cremona, and therefore few other  easily attainable patterns for Ceruti to have worked from.  The Museo del Violino in Cremona retains several relics of Ceruti’s workshop, including a paper pattern which seems to have been the original drawing for this bass, and also patterns for the distinctive soundholes. These are very classically Cremonese in form, with very elegantly extended lower wings. The instrument is made principally from walnut, a commonly found timber used widely in the region, but rarely in fact in violin making. The choice was almost certainly determined by the size of the boards required; it is harder to find maple trees of sufficient girth to yield such clear, flawless pieces. The ribs and head are of matching walnut, but the front is of traditional spruce , extended in the lower bouts with ‘wings’ added by the maker.  The most striking thing about the instrument in general is the large amount of original varnish remaining, a beautiful deeply tinted red brown recipe.

The authenticity of the instrument is confirmed not just by the well-preserved original label within, stating ‘ Jo: Baptista Ceruti Cremonensis, fecit Cremona 1800’, but the brand applied to the label, a circle enclosing his intitials ‘GBG’ surmounted by a cross, is also impressed twice into the outer surface of the ribs. 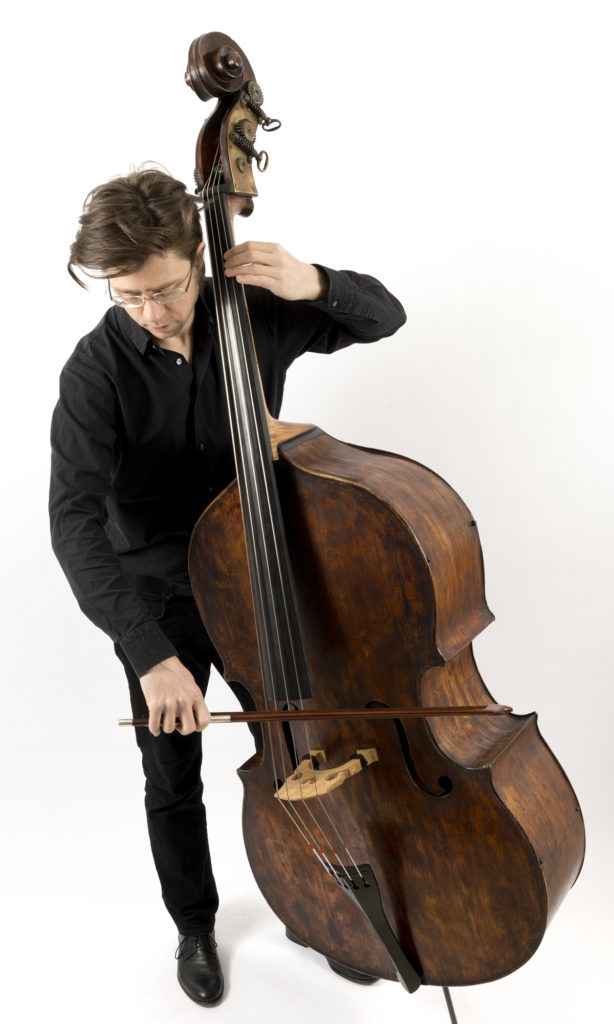 Håkon Thelin is a double bass player and composer. He performs with the ensembles Oslo Sinfonietta and POING. He is an associate professor at the Norwegian Academy of Music and teaches composition and improvisation. (Photo by: Thomas Widerberg)